A Legacy of Volunteerism for Routt Wildernesses

The organizational history of Friends of Wilderness (FOW) includes and overlaps with a rich legacy of volunteer stewardship for the Mount Zirkel, Flat Tops and Sarvis Creek Wilderness areas dating back to the 1980’s and earlier. Driven by a common passion for the preservation of Wilderness principles, a number of individuals stepped forward and played integral roles throughout the ensuing decades.

It’s safe to say that FOW would not be the successful Forest Service partner it is today without the dedication and inspiration of the many individuals who blazed the trail over the years, the support and encouragement of the local community – and the vision and leadership of one determined woman. 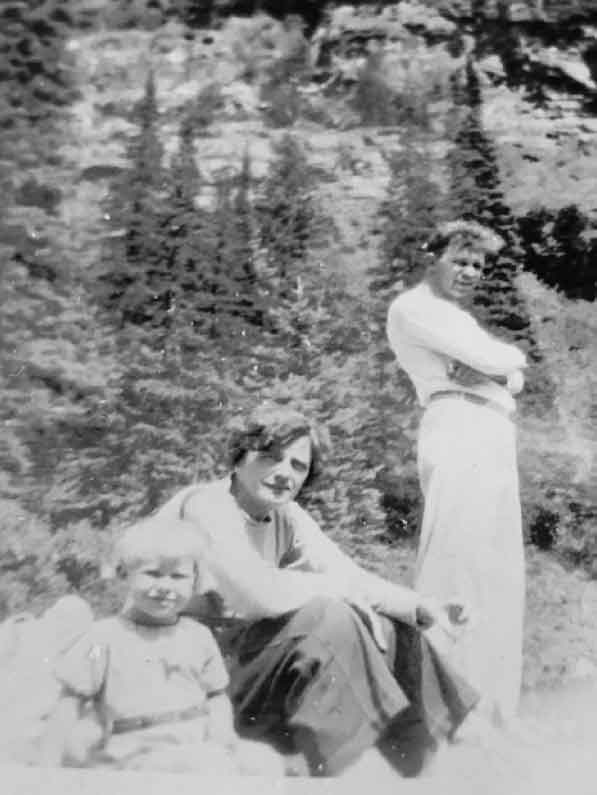 Ann Ross actually started her volunteering at age 3 in Rocky Mountain National Park where she was known as “Little Miss Camper” for cleaning up campsites and picking up sticks and pine cones for bonfires.

No one has served as a local Forest Service volunteer longer than Ann Ross, who in recent years, has served as trailhead host and patroller at Fish Creek Falls. Ann recalls performing trail maintenance in local forest and wilderness trails in the 1970s with a group led by a man named Frank.

She especially remembers working to repair a section of Mad Creek Trail after a torrential downpour – slipping, sliding and falling on her “butt” in the wet, red mud. Another of Ann’s early volunteer memories was camping in the Mount Zirkel Wilderness for a week to repair backcountry campsites.

The Family from Mississippi

In 1989, Denise and Robert Scifres, a school teacher and principal respectively, drove with their children to Colorado from Jackson, MS, and arrived in Steamboat Springs with the hopes of working as volunteers in the Wilderness during their summer vacation. The Steamboat FS district office accepted the Scifres family’s offer and even provided them a cabin to serve as their summer home.

Denise and Robert underwent two weeks of intensive training – one week of wilderness instruction and another of fire training — and then hit the trails in and near the Mount Zirkel Wilderness. Their primary contact was FS wilderness ranger Kelly Colfer. Carrying a shovel and Pulaski, the Scifreses took on various trail maintenance needs in stride, whether it be cleaning out waterbars, clearing fallen trees from the trail and serving as ambassadors to hikers and overnight backpackers.

The Scifreses’ idealism and commitment created a relationship with the Forest Service and Mount Zirkel Wilderness that has endured for more than three decades. Their three children have grown into adulthood, with two of them now making their careers with the Forest Service. Robert & Denise continue as summer volunteers in the Zirkels, operating out of the Seedhouse Guard Station to this day. Their efforts aligned with other local Wilderness volunteers when they joined FOW in 2001.  Robert later served as the organization’s second president. 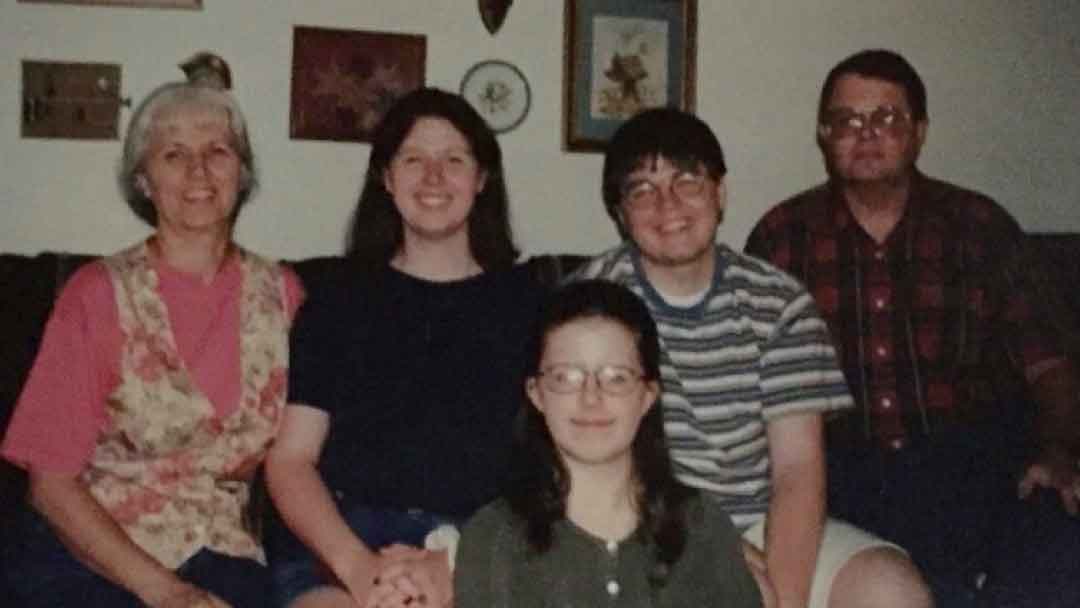 The Scifres family, originally from Mississippi, began volunteering in the Zirkel Wilderness in 1989.

1989-90: Friends of the Mount Zirkel Wilderness

FS Ranger Colfer recognized other roles that volunteers could fill when in 1989 – the same year the Scifreses began their stewardship – he coordinated with four Steamboat locals to start an organization that would be tasked with visitor contact and education at Slavonia Trailhead. Called Friends of the Mount Zirkel Wilderness and organized as a non-profit, it was led by president Lee Schoeneman, Jim Vail and the late Ann Rich and Diane Mahoney who recruited others. They counted people, horses and dogs, answered visitor questions and encouraged good hiking and camping etiquette. These volunteers also began training for trail maintenance but, unfortunately, the group fell apart when Colfer was transferred to another FS office.

The current Friends of Wilderness had its earliest beginnings with two women who had a common passion for Wilderness, hiking and camping – Elaine Dermody and Jan Hatcher. They met in 1995 and decided to team up to support the Forest Service and the Mount Zirkel Wilderness, reporting to wilderness supervisor Ted Porwell.

Elaine and Jan also found a shared love of the Zirkels with llama rancher/outfitter John and Mary Ann Duffey who had previously provided llamas to the Sierra Club and the Forest Service directly. The Duffeys trained Elaine and Jan in the use of llamas as pack animals and then loaned llamas and equipment to use both for camping while on trail patrol and hauling out garbage. The Duffeys’ generosity played no small part in FOW’s early success.

Soon after, Elaine and Jan recruited their friend Pat Wessel; the three became known as The Lady Rangers. These women patrolled trails, provided education to visitors and cleaned up backcountry campsites. They were assisted by their husbands – Wade Hatcher, Win Dermody and Bob Mayfield (Wessel) – who helped haul out larger amounts of garbage with horse stock.  These Founding Members often patrolled on horseback and led a series of highly popular educational llama treks. 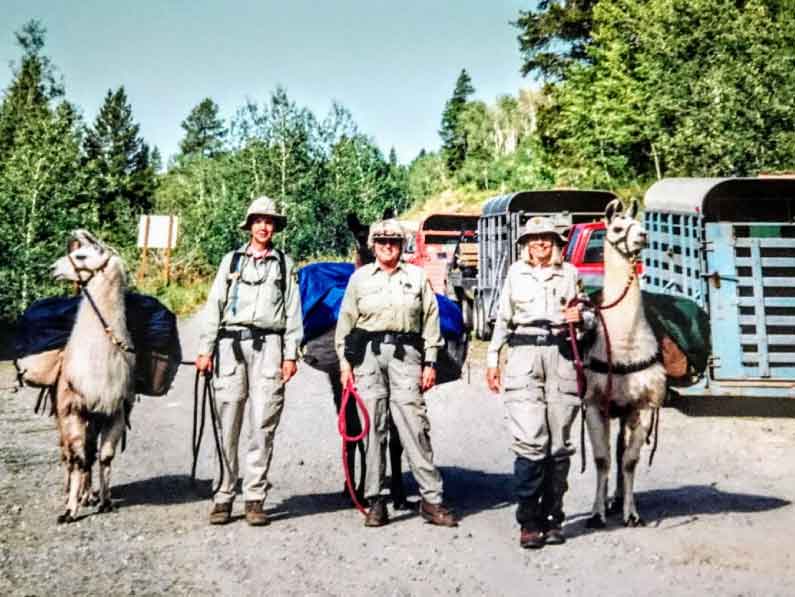 Elaine Dermody, pictured with other Lady Rangers in 2000, founded Friends of Wilderness.

By 2000, it had become apparent that the volunteers needed to grow and become more organized. Forest Service budgets were declining and local FS staff had decreased from three to one full-time, seasonal ranger to work in and patrol the Zirkels. Elaine recognized that the Forest Service needed more help, more volunteers and that year formally established a new organization called Friends of Wilderness.

Soon after, the Dermodys attended a Forest Service regional workshop to learn what other volunteer groups were doing. They returned home inspired with new ideas and began working with Forest Service Wilderness Ranger Jon Halverson to develop a Memorandum of Understanding which defined FOW’s scope of activity as providing trail patrollers for all Wilderness areas in Routt County – Mount Zirkel, Sarvis Creek and the northern Flat Tops. That MOU was signed and became official in January 2001.

During the late 1990s and early 2000’s, Halvorsen began referring other like-minded individuals to FOW, including Jay and Elaine Kopf, Emily and Tony Seaver, Suzanne and John Munn, and Barb and Russ Orms. These early recruits, with their passion for volunteering on Wilderness trails, found a home in the young organization and their efforts greatly expanded FOW’s patrol activities.

FOW’s responsibilities soon grew at the behest of Halverson. Trail maintenance activities were formally added to the Memorandum of Understanding between FOW and the Forest Service. These activities included clearing fallen trees from trail, water bar maintenance and more. But little did those volunteers realize how much this function would grow as a result of the Routt Blowdown of October 1997 and the ensuing spruce and pine beetle epidemic.

As FOW expanded its scope, it became more active in the Flat Tops and Sarvis Creek Wilderness areas. This included a new volunteer, Jim Berger, who had kind of “a legendary presence”, according to Suzanne Munn, “getting to areas of the Flat Tops that the rest of us could never reach. Beginning in 2004, Jim patrolled alone and mostly on foot with his Siberian Husky Meeka. He always carried a saw and sometimes a Pulaski. He also bushwacked off trail to find illegal campsites or sloppy hunting camps, hauling out garbage and abandoned camping equipment, sometimes with the aid of horse stock.

No history of FOW would be complete without acknowledging the early support of Yampatika and its director at the time, Karen Vail. This Steamboat Springs-based outdoor educational organization served as FOW’s partner during the early years. As a legally-recognized non-profit, Yampatika accepted donations on FOW’s behalf, money that was critical to its early success. Karen personally contributed to FOW’s early growth by adding to the group’s knowledge of the environment, trails and the use of llamas

In 2006, Suzanne and John Munn added the final level of structure to FOW. With the help of attorneys, they established bylaws, registered Friends of Wilderness with the State of Colorado and achieved 501(c)3 non-profit status with the Internal Revenue Service.

Suzanne became FOW’s first president after incorporation, serving through fiscal year 2009. She was followed by Robert Scifres, who served as the second president, from 2010 through 2012.

50th Anniversary of the Wilderness Act

2014 marked the 50th anniversary of The Wilderness Act, enacted by Congress and signed into law by President Lyndon B. Johnson. Under the leadership of Tony Seaver, FOW’s president from 2013-2014, along with Win Dermody, Emmett Stafford and Bob Korch, the organization led a year-long, community-wide celebration. FOW partnered with other outdoor/environmental organizations including Yampatika, Rocky Mountain Youth Corps, the Sierra Club and the Forest Service for a series of events culminating with a Walk for Wilderness. Other activities included Wilderness themed movie nights, a major Wilderness display at the Steamboat Ski Area, signage at trailheads, a banner over Steamboat’s downtown main street and a major project to repair a wet section of Three Island Lake Trail.

FOW’s Wilderness footprint also increased during this time as trees falling from the beetle kill epidemic as well as forest fires reached catastrophic levels. In 2017, volunteers cleared over 900 trees from area trails, including the Parks District side of the Zirkels, Sarvis Creek and Flat Tops wildernesses and in 2018, that number increased to over 1,500 trees.

Whether decades ago, recent years or today, so many individuals have stepped forward as volunteers and leaders to contribute unselfishly their love for and preservation of Wilderness. They volunteer when they can, and contribute within their capabilities. They share camaraderie and have fun. That is the growing legacy of Friends of Wilderness.

“Thousands of tired, nerve-shaken, over-civilized people are beginning to find out that going to the mountains is going home; that Wilderness is a necessity,”